This direct adaptation of the explosively popular trading card game is designed to introduce new players to Yu-Gi-Oh and challenge dueling veterans with intelligent, realistic competition. A tutorial teaches rookies about all the basic plays, rules, and strategies of the card game, including turn progression, spells, summoning, tributes, and more. Once they've mastered the fundamentals, players can duel against Yugi himself, in hopes of winning new cards and improving their virtual decks. Card artwork in the game is re-created directly from the actual trading cards, to enhance the authenticity of the PC simulation.

I consider myself to be pretty smart when it comes to games ... be it tabletop RPG's, card games, board games, or of course video games. Throughout the years of playing finely tuned strategies in Warhammer 40k, Magic: The Gathering, and even the Pokemon card game, I really haven't seen too much that gets me stumped anymore. That's where Yu-Gi-Oh comes in. I have a 9 year old who loves it and has played it for years, and throughout all of the video game versions and attempts he has made to show me how everything works, I still didn't understand it. Well, Konami has released Yu-Gi-Oh! Power of Chaos: YUGI THE DESTINY for PC, and thanks to it, I now can not only play Yu-Gi-Oh, but beat him a time or two as well.

First off, I still don't fully understand the reasoning behind the huge title of the game since I can sum it all up in one word ... tutorial. Basically, Yu-Gi-Oh (Let's have an understanding that from this point forward I'm referring to the video game so I don't have to type all 500 characters of the title, OK?) offers up an in depth tutorial to help learn everything you need to know how to play. You'll learn about hit points, attack and defend numbers, all four phases of the turn (draw, battle, secondary, end), spell and trap cards, and even all about constructing your own deck by yourself and what it takes to do that.

Once you do a tutorial (or skip it if you already know how to play), you can play either a single match or tournament style match play (best two out of three with sideboard changes allowed) against Yu-Gi himself to begin learning the game and trying your own abilities in a full on match up with no relaxing of difficulty or any kind of difficulty settings to make it easier. While this may seem like a bad thing, it actually turned out to be a big plus. Yu-Gi wound up playing with almost identical cards to what I had, and while I was getting the you know what stomped out of me, it actually worked great to teach me some good strategies to use and how to play one possible card with another to start wearing down my opponent. After about 4 times of getting a good thrashing, I finally started turning the tables on Yu-Gi and starting beating him with his own strategies.

Now while this works well, and the game is a great learning tool, there are a couple of things that I felt really kind of hurt the game overall. For starters, you get to learn all about constructing your deck and how many of what cards you can use, but you can't use any of this helpful info for quite some time. Up front, you are given only a 40 card deck with one fusion card, and you have to earn new cards (one per victory) by beating Yu Gi over and over and over again ... which leads me to my second issue with the game.

While it was great to be able to sit down and play against (and beat) one of the most popular TV cartoon heroes going with the young crowd nowadays, it also tended to get really repetitive seeing my spiky haired rival jumping up constantly using the same cards and tactics over and over again. There is absolutely no multiplayer (online, LAN, or hotseat) or ability to change up opponents and deck styles that you are playing against, so things can get kind of dull after the first few hours of playing. Part of the fun of the Magic card game is that you can interchange cards and play a variety of opponents and their decks, but not here. Be prepared for long, lonely one player only matches against Yu-Gi until you just don't play it anymore.

Graphically, the game has a good thing going for it in the cards and the great job that was done on making sure that they not only looked like the actual cards, but also contained all of the information or wording on them as well so you felt like you were really playing the card game. The field will also change colors to reflect certain universal spell cards that are played to grass or a dark vortex to help you know what group of monsters will be benefiting from the effect of the card played. On the other hand, Yu Gi tends to show up way, way too frequently in my opinion, and he will usually shows his face after every move that you make which tends to get a little annoying after a while.

The sound in Yu-Gi-Oh was not anything to write home about by any means, and if you don't get tired of the same music tracks playing over and over and over again, you will almost surely get drained hearing Yu Gi not only pop up after every move you or he makes, but he also feels it necessary to provide some kind of comment each time he shows up. He also tends to repeat these comments over and over again as well, so be prepared to be taunted or told what a great attack you just made repeatedly until your ears bleed.

Overall, I'm not trying to be too overly critical of the game because for everything I've seen, it's designed to be geared towards the beginning Yu-Gi-Oh player to help learn how to play and how to stack strategies and play various card abilities ... and I can walk away saying that I have in fact done that after playing. Old school players will probably grow bored with it quickly, but as a hint for you kids out there ... this might be a great stocking stuffer for Mom or Dad if you're trying to get them to play with you but keep getting 'I would but I don't get it'.

Thanks to a handy dandy tutorial, I can now say that I understand how to play the Yu-Gi-Oh card game, and I know how to build my own decks complete with sideboard and fusion decks, plus how the playing field works. On a downside, there are no extra cards to experiment with up front, and building your own deck or even sideboard won't come into play until after you have beaten Yu-Gi at least 10 - 15 times. In addition, the lack of opponents and decks or multiplayer ability tends to get a little dull after a few hours of playing.

The cards were done perfectly, down to the most minor detail. The backgrounds also looked nice, but Yu-Gi felt the need to show up over and over again anytime he or I played a card. After a while, I kept hitting space bar, escape, or anything I could find just to try and get him off the screen.

If you don't get tired of hearing the repeated music which runs constantly, you'll probably quickly get weary hearing Yu-Gi-Oh popping up and tossing out some taunts or complaining about 'what am I going to do now', since he feels the need to accompany each of his appearances with a comment or two.

For the first time, I can honestly say 'medium' to a Yu-Gi-Oh game. After learning how to play, winning or losing is of course determined 50% by your strategy, but 50% by draw of the cards. A great hand can prove a win even if strategy fails sometimes.

Yu-Gi-Oh for beginners is a great idea. I really wish I could have taken my newfound skills up against an online opponent or been able to build my own deck up front though. I liked the baby steps while learning, but I don't like it when it seems to do baby steps for the next three days of playing. 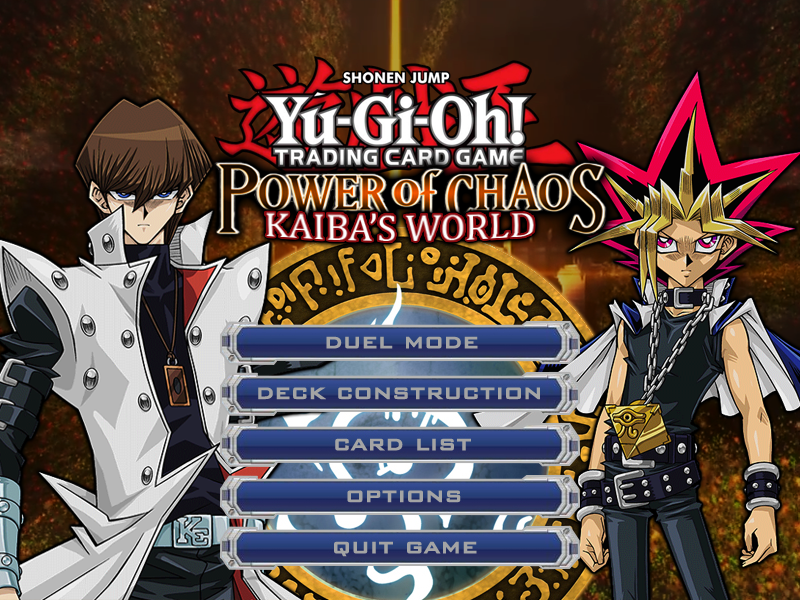 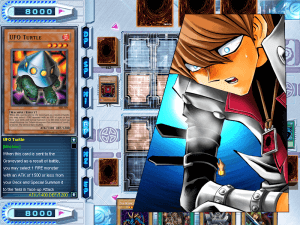 Really, this game is the best way that I can recommend for someone to learn how to play. This is a good buy for anyone who wants to play the card game, but doesn't really know or understand how. Veteran players will probably tire of it after a couple of days since you can't really do anything with changing out cards or making decks until after a long period of winning, and playing against what seems like the same cards over and over again may get dull. This is a great idea and formula to use, but hopefully next time they will allow for up front deck building and opponent play to really make this a fully worthy experience.