I usually resist the urge to include snippets from press materials in my reviews, mostly because I like to retain a little fragment of industry mystique. If you knew the scintillating truth of what goes on behind the gilded portcullis of the games business (clue: lots of truffles) where would the magic be? Even so, the letter which accompanied the review code for Mega Man's ninth platform outing is almost too perfect not to share a little.

'We want to HURT YOU,' it begins, in alarming fashion. 'Mega Man 9 is the hardest game ever,' it proclaims. 'You will die on every screen. At least a hundred times,' the letter continues, now sounding more like a terrorist threat than an invitation to play. 'Our goal is to make you cry and give up, not just on the game, or gaming, but life itself.'

Crikey. Capcom wants to drive us to suicide, and its weapon of choice is... Retro?

Mega Man 9 is a brand new NES game for the 360, PS3 and Wii. Unlike Capcom's recent digital downloads, this isn't a modernised sequel or remake. It's absolutely, undeniably a NES Mega Man game, right down to the crunchy music, chunky colourful sprites and basic controls. It just happens to have been made in 2008 for today's trio of consoles.

Pretty much everything kills you. That's the first thing you learn. Mega Man's energy bar erodes quickly through the slightest contact with the numerous enemies and obstacles, some of which can be blasted away with your weapons (of which, more later) but there are also times when you swear it's impossible to get past a screen unscathed. 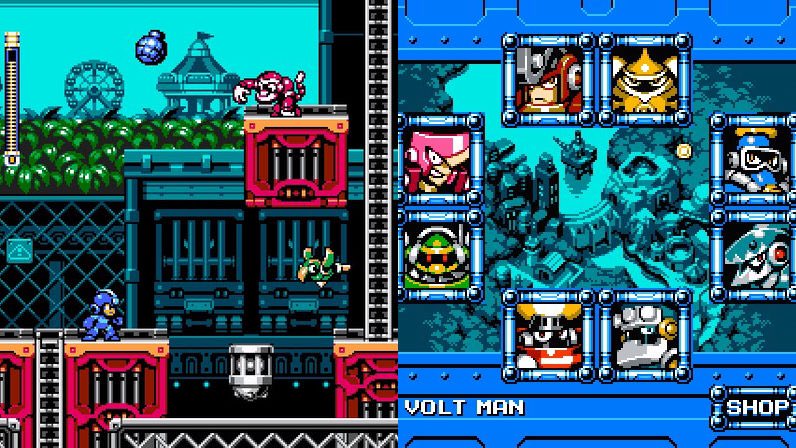 To make things extra tough, each impact knocks Mega Man backwards slightly. Just enough to drop him off a ledge, into a deadly pit, or onto some jaggy spiky thing. Mmm, thanks.

Yet when the worst happens, you're always aware it's your fault. Like most great 8-bit titles (or games in the 8-bit style) the game operates like clockwork. Everything is predictable, everything follows a set pattern. Identifying that pattern, and using it to avoid damage, is the throbbing heart of the gameplay. Far from becoming routine, it's a constant tightrope walk, with each new screen bringing fresh hazards to navigate past. Die, and in true sadistic retro style you start the level over again.

While some may justifiably wince at such cruel and arguably outdated design, it's essential for raising the stakes. The game just doesn't tolerate second best, and thus harks back to a time when completing the latest game was a feat you spent weeks or months obsessing over, earning enormous playground respect in the process - not something you absent-mindedly bashed through in a weekend rental.

This has got to be the sexiest representation of a short and squat adolescent robot ever.

There's a lot you can say in regards to the mess that was the original Mega Man box art. Let's be honest — in the days of the NES and the subsequent Genesis and SNES systems, box art was almost everything. Your packaging had to be attractive and eye-catching. This was before we had the Internet or any credible news sources to tell us how it is with a game and why it is or isn't worth our money. Sure, you had some trade magazines, but these were largely amateurish and poorly written back in the day, and the writers had no idea what they were talking about half the time, likely because they were too busy bangin' 7-gram rocks. (Too early?)

But then you have the Mega Man box art. How the hell could this sell ANYONE on the game within? The game that was, essentially, a variation of the run-n-gun formula — think Contra except with a stage select (which was, believe it or not, a revolutionary feature at the time and is STILL rarely used in most games), a life bar, and a silly game-within-a-game of rock-paper-scissors. (Not nearly as confounding or confusing as Pokemon can get, mind you, but still a bit odd at the time.) Yes, the overall game was excellent (if rough around the edges…this was, after all, one of Keiji Inafune and co's first major projects, and bear in mind that the team that made it consisted of like, less than 10 people), but that box art is downright hideous. Who's going to play a game starring a middle-aged man who looks like he stumbled out of the movie Tron and can't even point his gun properly?

Those who did bother to find out what the deal was were pleasantly surprised with the game in most cases, but damned if Capcom USA didn't seem as though they were intentionally trying to sabotage sales.

You have to give the art some credit, though, as in the '80s and '90s, games had box art that was often hand-drawn or done in-house or by a third party, or in some cases, 'Americanized' (in order to hide the Japanese influence — the same ridiculous crap they pulled with a lot of anime exported from Japan then). Back then, artists had to guesstimate what to make a character look like on the box based on an often nondescript blob of colors and pixels. 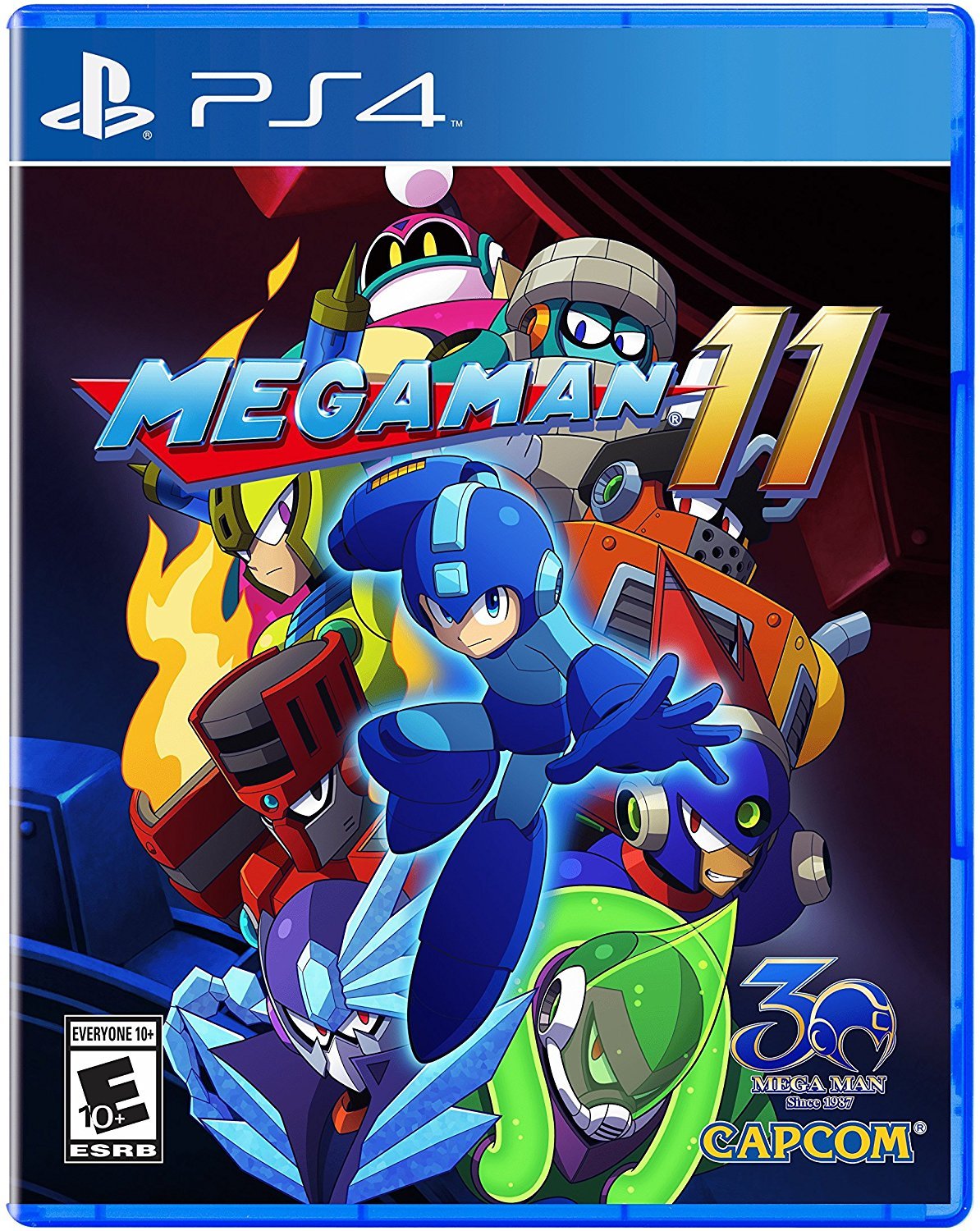 Why does Mega Man still have a handgun instead of his Mega Buster? Why would you build an industrial zone over a pit of lava? Why is one of those giant spheres from Bomb Man's stage from MEGA MAN 1 in the background? Why is Dr. Light feeling up Crash Man's ass and sending him after Mega Man?

Yeah, it was getting better, but it wasn't until Mega Man 3 that the character started looking as he should on the cover.

Still not quite there though. Once again, Mega Man is inexplicably standing near a bottomless or lethal pit, he's lasering a chrome-colored Spark Man IN THE BABY MAKER, Top Man is green and posing only semi-menacingly while Rush stands around looking like he has no idea what's going on.

Mega Man is, for some reason, all one shade of blue. Despite the in-game sprites making it bloody obvious that he has a two-tone color, light blue for the body and light blue for the lower extremities. And his face still looks like that bizarre monkey-mutant-baby everyone has a Photoshopped avatar of.

Also note the awesome attention to scale, with Pharaoh Man standing ON TOP OF DR. COSSACK'S FORTRESS. That would make him even larger than the Guts Dozer from MM2. Hell, I'm pretty sure he beats Gamma from 3. I almost want to fight a giant Pharaoh Man now…

Getting warm — wait, why is Mega Man just casually absorbing an electric blast from Gravity Man like it's no biggie? And why is there no stage like this one in the game?

Then we get to 6…the last in the series on the 'near death to the point where even life support won't do a bit of good now' NES. What's interesting is that even though it came late in the gray toaster's life, it's still the best of the NES US box art bunch. Which, given the standards of NES box art at the time…well, it ain't sayin' much. 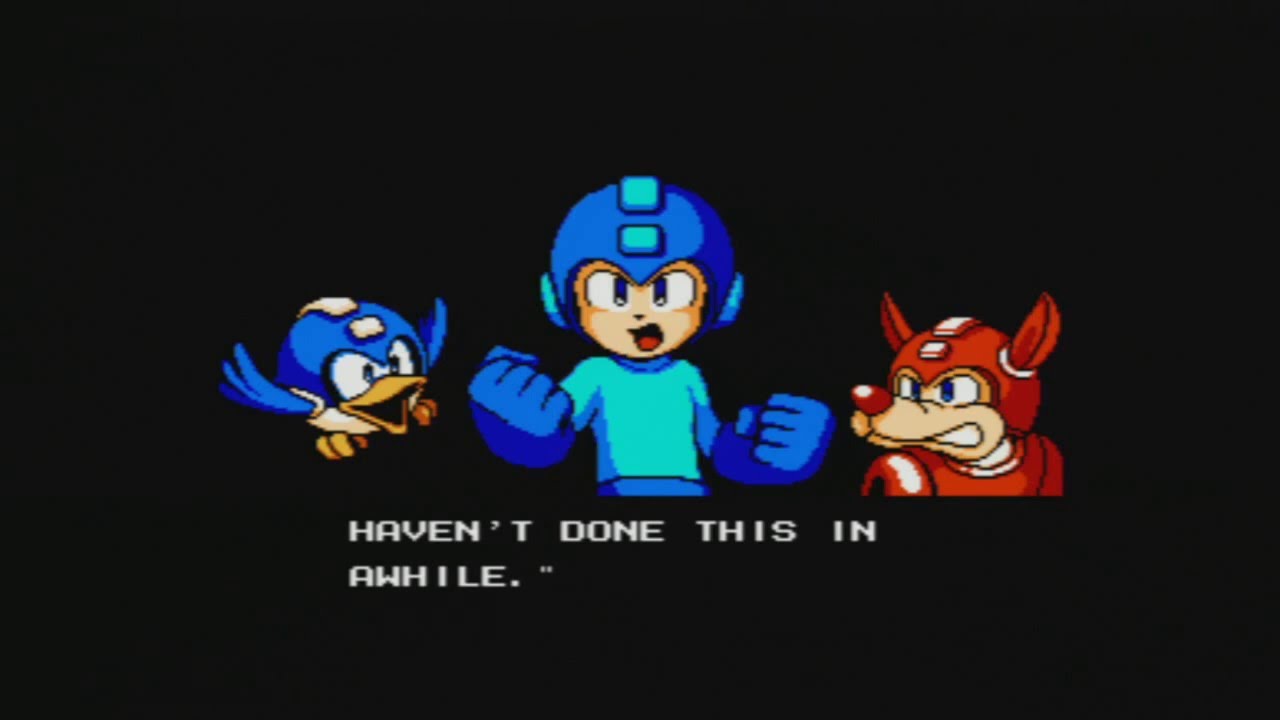 So after Mega Man moves to the 16-bit generation, we could probably have expected better box art, right? I mean, cheesy as it was, even Street Fighter II's SNES box art was markedly better than anything Capcom had put out on the NES.

Ignore the fact that the background looks sorta like the posters you got with Transformers toys in the 1980s. It's all in your head.

Well, at least Mega Man finally looks closer to his original design, even if they inexplicably gave him muscles (mind, the Mega Man cartoon was airing then, and in that show he had robo-muscles…so eh) and made him a uniform shade of blue again…and hey, Wily finally shows up on a US box! Progress.

Yeah, finally, Capcom decided to stop pretending this game wasn't Japanese and used the Inafune-style art on the cover. I mean, the excessive use of blue on the cover washes everything out a bit, but at least it actually looks like the Blue Bomber.

But Capcom ACTUALLY WENT TO THE TROUBLE TO MAKE BOX ART FOR MEGA MAN 9. BEAR IN MIND THAT THIS IS A DOWNLOADABLE GAME WITH NO NEED FOR A BOX COVER

Fuck you, Capcom. And I mean that in a very nice way.

Yeah, Capcom figured they'd just take it in stride and reference not only the incredibly '80s 'grid' design of their old NES boxes, but that they would make Mega Man into a hideous middle-aged man again. And Wily is a cyborg. Lovely.

Then we get to Mega Man 10, whose box art seems to take some cues from the Mega Man X series:

I have to admit that I feel a bit cheated that there was no giant dragon with machine guns or a killer ram-headed robot with claws in the game.

Yes, Protoman looks strangely reminiscent to Zero of Mega Man X fame (who has basically hogged the series for years since we all stopped caring about X a long time ago anyway) and Mega Man is doing his best Luke Skywalker impression.

So there you have it. It's like we went full-circle with the 'box art' for 9 and 10, and now I seriously miss the days when artists could make up anything and put it on a box. Imagine the box art for Modern Warfare done as some kind of postmodernist expression of angst and middle-aged men with blasters.