Killer Instinct arrives at retail after a year being available to download from the Xbox One dash. The game includes 8 fighters and a bonus new character code and comes in at around £15. Is it a steal, or is it better to download the free version and add to the playable roster of characters on an individual basis. Take a look at our Killer Instinct Combo Breaker Pack review for the full low-down.

Today we take a look at Killer Instinct which launched as a free to play game on Xbox One last year and is developed by Double Helix Games & Iron Galaxy Studios to become the third game in the series which made its first appearance in arcades way back in 1994. The Xbox One home has meant an abundance of players jumping in to the once download only title, and with Microsoft offering the full game to loyal supporters for free it’s interesting to see a retail release for those not connected. Sadly, the retail version Killer Instinct Combo Breaker Pack release comes just before the Season 2 update and means those who jump in offline won’t be able to take advantage of that. However, those who do connect online will benefit from some tweaks beneath the surface and the new character TJ Combo. There’s an additional season 2 character Maya who is available now to fight against, but not play as just yet. What the Combo Breaker Pack includes is all the season one characters unlocked from the get go, which if you’d bought the online, free to play version only comes with one character. The others have to be purchased separately at a cost of around $5 each. The story mode also comes with a premium, although calling it a story is somewhat misguided. So in terms of value for money forking out £15/$15 for the disc based version seems like good value for money if you’re interested in having all the characters to mess around with.

So, that’s what is included, which by fighting game standards is pretty bare bones. In-game players will have to work long and hard gaining XP from fight wins or losses to unlock customization options and different colours for their chosen character. Sadly, there are no extra costumes included in this retail release, and so if you’re after a new set of threads will set you back a further £2.39 each. Whilst the small sum might seem paltry and easily affordable for some, when adding costumes for all 8 fighters it starts adding up considerably. There’s an Ultra Edition available which does include 8 bonus costumes and items, but it all balances out turning the game into the same pricing as a standard retail game.

The biggest problem with Killer Instinct is the fact that its content is severely lacking when paying the uppermost premium for it. As a free to play game there’s plenty of excuse for the game to simply not have the wealth of options its fighting game peers present. However as a retail release it’s simply not offering enough to warrant an essential purchase unless you’re a massive fan in which case it’s decent value for money for all intents and purposes.

The core game consists of an arcade mode which sees you fight all the other combatants in sequence followed by one of three ending scenes which are basic images and not worthy of much attention. Then there’s a never ending survival mode against the same 10 characters at random which tests players mettle as the difficulty ramps up the further you progress. A standard practice mode is included and a Dojo to learn the ropes – which has to be said is one of the most comprehensive of any fighting game. So kudos there for making the more technical aspects of fighting games easily accessible to those willing to learn. And, that’s it for actual single player gameplay modes. The online multiplayer fares better, but when looking at the package as a whole and it’s clear there’s just not enough value here despite the core game mechanics being easy to pick up and play for newcomers and offering lots of depth for those willing to go deep into how the game works.

The remaining question then is who should buy the combo breaker pack? It’s most likely if you’re already well connected with Xbox One you can download the free season 2 version and jump in right away with the solitary character, survival and online versus. However, there’s then choice as to whether you want to buy all the other characters especially if only a couple appeal. If however you want to go the whole hog and sample all of the characters on offer before finding your feet, then the combo breaker pack is a fairly sound investment over buying them all separately.

If you want to buy Season 1 or 3 individually, in the Xbox store season 1 is called 'Killer Instinct: Combo Breaker Add-On' and season 3 is 'Killer Instinct: Season 3 Combo Breaker'. Just search Killer Instinct in the store and it should bring up all the seasons and different add ons. Just make sure you thoroughly read the descriptions before. The game includes 8 fighters and a bonus new character code and comes in at around £15. Is it a steal, or is it better to download the free version and add to the playable roster of characters on an individual basis. Take a look at our Killer Instinct Combo Breaker Pack review for the full low-down. Download Now For; Arbiter. Biography & Videos.

Killer Instinct offers a flashy fast paced game with neat visuals excellent audio and some slightly improved visuals with the season 2 update. Newcomers can easily button mash their way to victory versus the AI and feel good doing so, yet with a bit of mastery, the game certainly comes alive as you pull off those devastating 50 hit plus finishing ultra combos. It’s a solid game here for fighting game fans but simply lacking in content at present which is a shame because it looks like Season 2 will offer a more robust number of fighters eventually and so waiting for a more complete version is no doubt tempting. 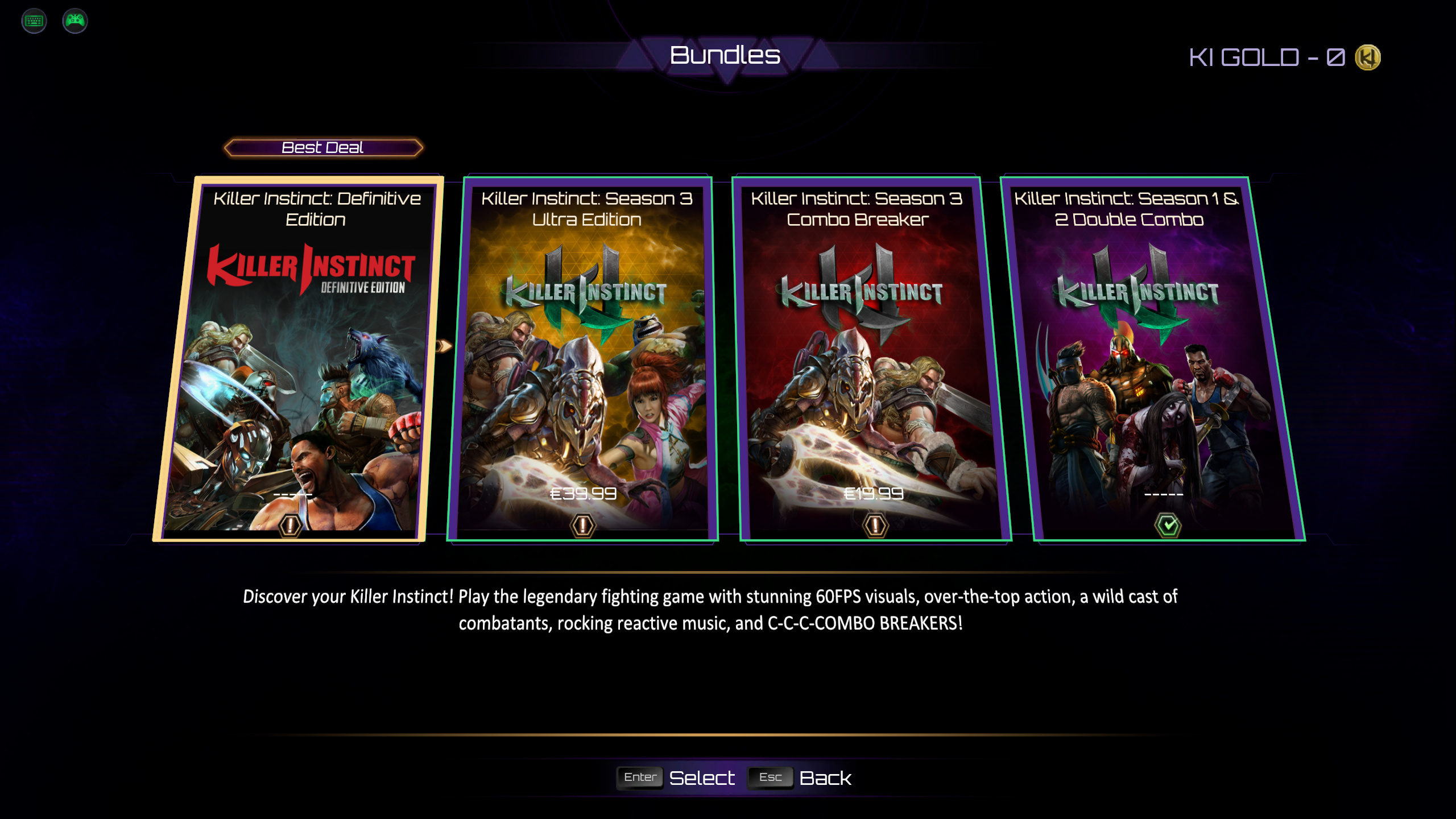 DESCRIPTION: Specific to Jago is a completely different way of utilizing the combo system in the game called “Around the World.” After an Opener, Jago can continuously combo with just Auto-Doubles and then end with an Ender to cash in the potential damage. The only rule is that the Auto-Doubles must be done in decreasing order of strength (returning to heavy after light). You can also mix and match between kicks and punches. Each button press does an Auto-Double, and Jago can start from any attack button. For example, here Jago does jump in Heavy Kick Opener HK,MP,LP,HP,MK Ender for 11 hits before the Ender.

DESCRIPTION: Jago still needs an Opener to start the combo and an Ender to cash in the potential damage that the combo builds up, but he can swap around the filling. Anywhere he would normally be able to do an Auto-Double he could opt to go Around the World, as seen in this example.

While the Around the World combo mechanic can be seen as a beginner strategy, there are higher level uses for it as well. Since Jago has to go in order, players will quickly figure out where to break the combo. If your opponent sees that you have done heavy, then he or she will easily be able to confirm the Medium Auto-Double that follows. This is a perfect opportunity to set up a failed Combo Breaker attempt, or to just Counter Breaker. Alternatively, since Around the World looks like manual combos, you can drop an Around the World combo and try to sneak in a crouching kick for a reset opportunity.

DESCRIPTION: Here we have allowed the opponent to see we are using the Around the World mechanic with two Auto-Doubles back to back. Since Heavy and Medium Auto-Doubles are more telegraphed, it is likely your opponent will realize your next Around the World input has to be light. We give the opponent some credit and assume he or she will break, so we Counter Breaker. Without meter, using the Around the World mechanic after the Counter Breaker is the best way to maximize damage and end the combo without allowing your opponent a chance to break the combo before the Ender.

DESCRIPTION: Using meter only adds about 6%, depending on your lockout combo, but if that amount is necessary to activate your Ultra, then it is well worth the meter.

DESCRIPTION: In this example, we have noticed that the opponent has caught on to us starting our combos with HK, and so the opponent is breaking it on the first hit. Rather than risk a Counter Breaker, which may leave us open to a combo, we simply go with a Light Auto-Double instead, locking the opponent out for his or her guess at our heavy. Starting at light allows us to go straight into Around the World from heavy once the opponent is locked out to maximize damage. Since regular lockouts are shorter, we only get four attacks before ending our combo. 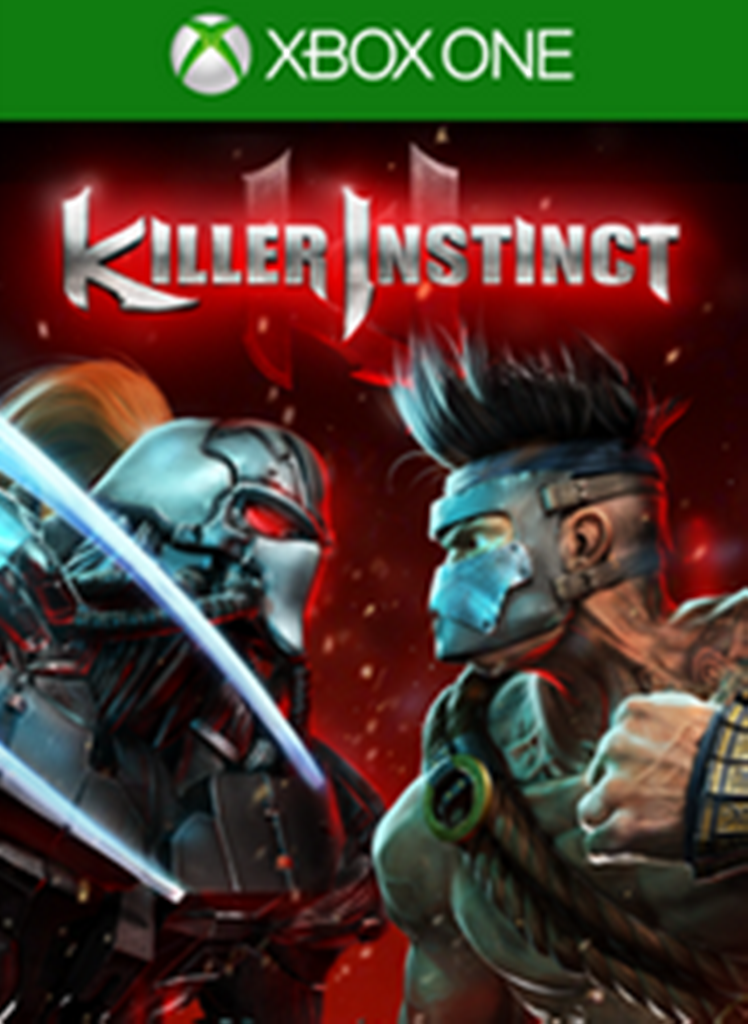 Killer Instinct Combo Breaker Pack How To Unlock Characters Are You

DESCRIPTION: Jago is one of the few characters in the game who can combo off of his regular throws; however, this does require Shadow Meter. His throws can be canceled into any Shadow Move, but you will most likely want to follow up with Shadow Endokuken or Shadow Laser Sword, as they give better juggle potential. Follow that up with Double Roundhouse into a Tiger Fury. If opponents start Combo Breaking the Double Roundhouse, you can always Counter Breaker it at no risk! Just be sure to bluff immediately after the Roundhouse hits.

DESCRIPTION: Jago’s main anti-airs are Tiger Fury and crouching HP. If you catch your opponent high in his or her jump with a Light Tiger Fury, you can follow up juggle with a Heavy Tiger Fury. Crouching HP is also an effective anti-air because of the air-to-ground priority system. If you Instinct cancel, you can turn one of these anti-airs into some nice damage as seen here.

Description: 126 Hit Ultra Combo. To maximize the number of hits in your Ultra combo, you have to use Jago’s Wind Kick linker. For variety in the combo, you can switch between Heavy Kick and Heavy Punch as they both build the least KV. You can also swap between Shadow Wind Kick and Shadow Laser Sword as Shadow Attacks build 0 KV. You may have to walk forward after the double Shadow Endokuken at the end of the combo to connect with the Ultra Cancel at the end.