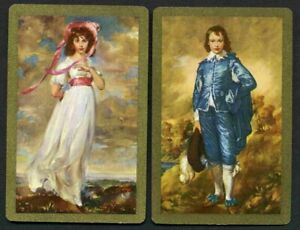 Pinkie and Blue Boy figurines are ceramic figurines based on figures from two famous paintings on display in the Huntington Library in California.

The figures of Pinkie and the Blue Boy are based on two paintings which hang opposite each other in the Huntington Library gallery in San Marino, California. The two works are the most famous on display in the gallery, and despite being painted by two different artists more than 25 years apart they have become synonymous with each other.

‘Pinkie’ is a portrait of the 11-year old Sarah Barrett Moulton, completed in 1796 by the English artist Sir Thomas Lawrence. Moulton was the daughter of a wealthy plantation owner in Jamaica, and was sent to England to complete her education. The portrait was commissioned when she arrived in England, but just a year after its completion Sarah died of whooping cough at the age of just 12 years old.

‘The Blue Boy’ is the most famous work of the celebrated English artist Thomas Gainsborough. Completed circa 1770, the painting is believed to be a portrait of Jonathan Buttall, the son of a wealthy merchant. The boy’s 17th century costume is thought to be a tribute by Gainsborough to the Flemmish painter Anthony van Dyck, who painted a portrait of the young Charles II in a similar manner.

Both works were purchased by the American railway pioneer Henry Edwards Huntington during the 1920s, as he built the art collection which remains in display today. 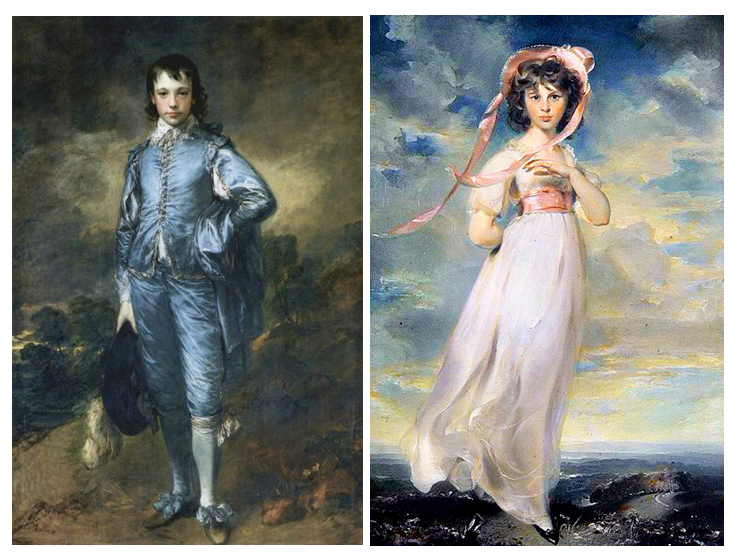 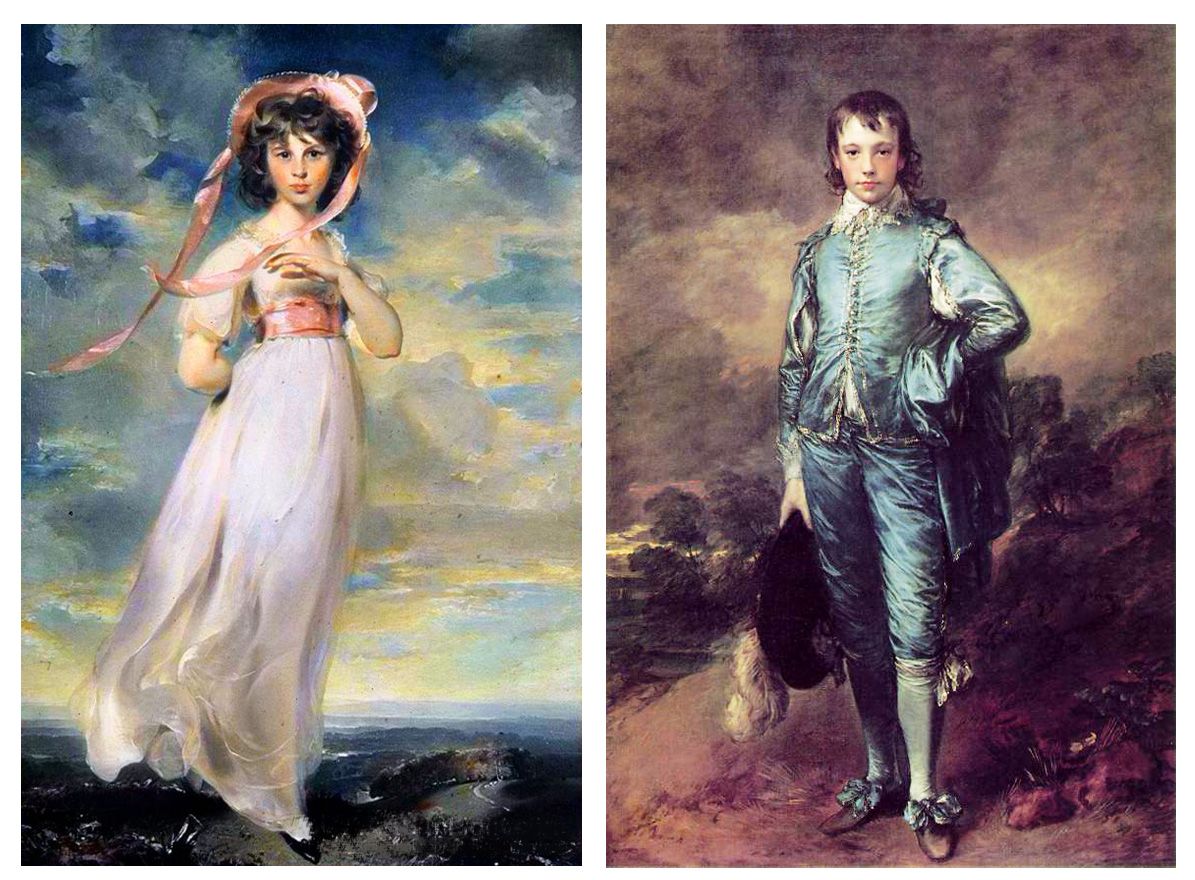 The two figures have been recreated as a pair of figurines by a large number of manufacturers over the years, since they developed an association with each other after being exhibited together in the 1930s.

Notable manufacturers to produce the figurines include Lefton (as part of their Old Master Series) and the German company Goebel, both of which produced the figures from the 1950s/60s onwards.

How much are Pinkie and Blue Boy figurines worth?

The value of a set of Pinkie and Blue Boy figurines depends entirely on the manufacturer that produced them. If the figurines were made by a well-known company with an established secondary collector’s market, good condition examples can sell for $50 - $150 depending on the maker. 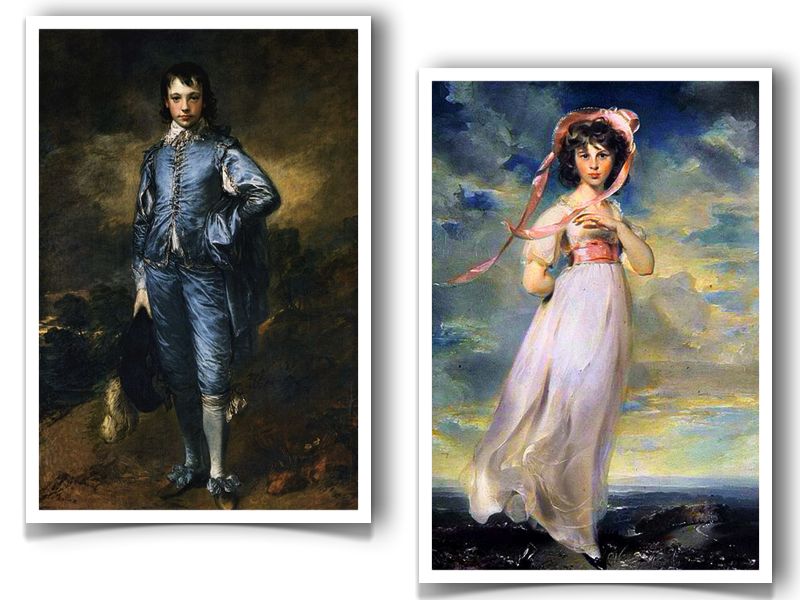 Modern unmarked figurines can be found for less than $10 each.

The Blue Boy is a painting by the English painter Thomas Gainsborough who was an expert in portraits and landscapes. The painting is suggested to be mainly a costume study, as it includes a very detailed depiction of boy’s clothing.

Boy is standing in the popular style of contrapposto used from the time of renaissance. He seems determined and confident in his stance. His one hand holds a plumed hat popular in 18th century while the on the other hand kept on the waist hangs a cape-like clothe. He is clothed in shiny, silky clothing. In the background is a big mountain slope with trees. Similarly dark sky seems surrounds the boy’s body in the romanticism style. Artist’s expertise at the landscape and portraits is infused beautifully to create an astonishing impression.

As mentioned above, the painting was supposed to be a costume study. Thus, painter has depicted the clothes with great attention and details including every crease. The shoes has some decorative cloth-flowering which was normal during the time. Even little boys under the age of 8 wore girly frocks and dresses as the main attire. Though, in today’s standards, it wouldn’t be considered as a macho thing.

Shift from Femininity to Masculinity

As mentioned above, little boys under the age of eight regularly wore dresses and there wasn’t much difference between a boy and a girl’s attire. A boy would wear ‘manly’ clothes only after the ceremony of breeching is attained. Thus, boys looked more feminine during the time.

Here in the painting, we see a shift from the feminine attire to more masculine appearance. There are clear markers to support this interpretation.

The overcoat, cape in hand, man-leggings (over the knees) and man-stockings (under the knees) are all wore by men. Though, the flowered-shoes somewhat resembles to girly attire. Moreover, the leggings and stockings were both also worn by women.

The shift is shown through the confident stance of the boy and the plumed hat. Plumed hat was considered a masculine item during the time. Many people wore them. The reason was the feathers which were worn on the hat when a man does some significant work in the society.

Also, the boy is at the age where he leaves his childhood behind and goes forward to be a man. Thus, this full length portrait could be called as a symbol of shift from the femininity to masculinity.

The Blue Boy’s association with another portrait Pinkie by Sir Thomas Lawrence is described in detail on the painting “Pinkie’s” post.

The painting came out as influence to many artists including Robert Rauschenberg who got inspired to paint after contemplating at this beautiful piece of art. Currently, this life-size painting rests in Huntington Library, San Marino, California.